Facing the Tyrrhenian coasts in front of the Island of Stromboli, on a cape of the Sant’Eufemia Gulf, is where one will come across Pizzo Calabro situated in a beautiful panoramic position. It is among one of more evocative centres of Calabria.

The centre Napitia was a colony founded by the Focesi led by the mercenary leader Nepeto (XII century BC).I twas destroyed much later by the Saracens.

The great Roman orator Cicerone and S. Peter were guests of Napitium, when they stopped here whilst on their way to Rome.
The ancient centre was abandoned during the first Christian era, probably due to pirate attacks from the sea.

The centre was re founded in 903 with its present day name which derives from Pizzu, which in dialect signifies promontory, referring to the place where Pizzo is situated. Pizzo entered the following century under the Calabrian possessions of the Normans, who had an important palazzo built. It then passed hands under the Swabians (1194-1266) and later to the Angioinians (1266-1442). The XIV century saw the arrival of some Basilian monks who constructed a monastery (1363). The centre continued to develop and fortify itself to satisfy the need for defence from the beginning of Turkish raids from the sea (XV century).
The Aragonese (1442) had the castle built, which later became protagonist in a clash between the French and Bourbon troops from the Reign of Naples. In the XV century Pizzo passed hands to the Sanseverino family, but was confiscated in 1504 for felony and conceded to Don Diego de Mendoza. Therefore, the fief went to the Silva family who kept Pizzo until the end of feudalism (1806).

A visit to the City

A visit to Pizzo offers noteworthy panoramic views overlooking the coast and Tyrrhenian Sea as well as Medieval glimpses of rare beauty. One can enjoy pleasant walks through the historical centre, that is, where it is possible to visit the San Giorgio Collegiate (1632), which preserves important 16th century statues.

The San Sebastiano Church is located nearby. To complete the visit to religious buildings in Pizzo, one can visit the Purgatorio (Purgatory) Church, the Grazie Church and not too far from the habitation, the Piedigrotta Church carved out in tuff in front of the beach by some shipwrecked Neapolitans at the end of the 17th century.  However, the Castle (1486) is a major architectonic element of great value. It was built on the wishes of Ferdinand 1 of Aragona andThe former King of Naples Joachim Murat, who was the brother-in-law of Napoleon, was imprisoned for several days in the town’s Aragonese castle and then sentenced to death. He was executed by firing squad on October 13, 1815, in the main hall of the castle and was possibly buried in the church of San Giorgio. Paradoxically, the castle is now called Castello Murat. Inside the castle is the Provincial Museum Murat. 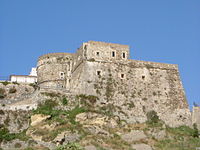