Serra San Bruno is a comune (municipality) in the Province of Vibo Valentia in the Italian region Calabria, located about 40 kilometres (25 mi) southwest of Catanzaro and about 25 kilometres (16 mi) southeast of Vibo Valentia. As of 31 December 2004, it had a population of 6,966 and an area of 39.6 square kilometres (15.3 sq mi).

The origins of the suburb takes one back to the arrival of Bruno of Hartefaust (1030-1101), better known as San Bruno or Brunone, founder of the Certosini Order. Bruno came to Italy at the end of the I century, having been given the lands of the Norman Ruggiero. The Saint had the first Certosa of Italia constructed and dedicated it to Saint Stefano of Bosco.

The developing suburb was therefore administered for centuries by ecclesiastics but an earthquake in 1783 destroyed part of the settlement, gravely changing its architectonic profile and the Certosa was also almost brought to the ground.

The architectonic patrimony of Serra San Bruno is constituted mainly by its churches, all built following the disastrous earthquake of 1783.

The Matrix Church, dedicated to San Biagio, is beautiful. It was built in a Baroque style during the late ‘700s and it’s situated in Piazza Barillari. It has a high granite façade and statues in its interior; 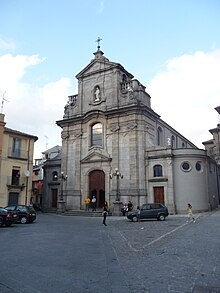 Saint Maria Church is another beautiful church that is dedicated to the seven sorrows of Mary. Its main façade is  noteworthy and is also in granite built in  Baroque style. This church preserves an altar originally from Certosa in its interior, which was transferred after the earthquake (1783).
Assunta of Terravecchia Church

This church is considered one of the most elegant church in the province of Vibo Valentia, just likethe homonymous church situated in the Spinetto district. Both were built in a Baroque style. 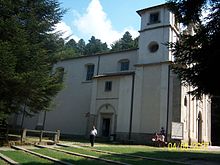 Certosa
The Certosa, even known as Carthusian monastery,  is the main monument of Serra San Bruno.It was founded at the end of the XI century and then destroyed by the earthquake of 1783 but some monks reconstructed it during the ‘900s. It preserves part of its Medieval building and hosts the Certosa Museum in its interior, which exhibits interesting paintings from the XVI and XVII centuries. Other important pieces are the sixteen medallions depicting the saints of the Carthusian, order realized by the sculptor from Serra, Giovanni Scrivo (1868-1933) created in 1908 for the Charterhouse of Calci (Pisa).To give the visitor a feel for the religious service, the museum has set up a small room with the reproduction of a handful of choir stalls;if visitors wants to know more about the charterhouse history, there is even a video room where they watch movies and documentaries about it.